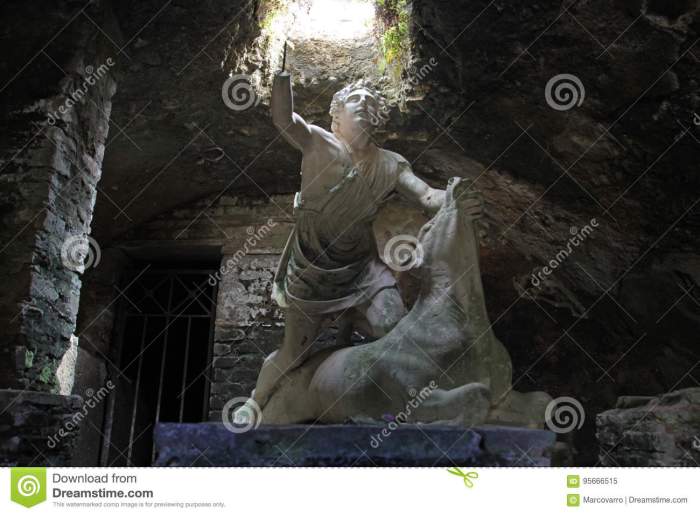 “His easy and fluent talk was like the rushing of a river. It seemed unstoppable. ‘Do you think the Christian religion is original? Not at all! Christianity borrowed its rites from the cult of the god Mithra, who was also born in a cave on December twenty-fifth.’
“I stared into his eyes, and then I raised my voice, ‘Tell me! Where did you find such information? Can you prove what you said?’ ‘Yes. I’ll give you written proof, but don’t ask me to prove anything else. Everything I say is true. I don’t invent anything,’ he said severely. Actually, a few days later, he showed me the encyclopedia through which he had learned about the god Mithra. While I was driving toward downtown Isola, he kept talking about religion. ‘The Roman Catholic Church built many cathedrals on god Mithra’s temples. Do you want me to give you evidence?’ ‘Yes, I do!’ I answered eagerly. ‘Hence, go to Rome and visit the Basilica of San Clemente. It’s near the Colosseum and easy to reach. This basilica has one ground floor and two basements. At the entrance, on the ground floor there is the newest church dating back to the twelfth century. If you go down to the first basement, you’ll find another church which goes back to the fourth century. On the second basement, you’ll find god Mithra’s temple. Some people perceive a peculiar energy in the lowest basement, especially when they stand near the water which flows down there. I don’t believe in extrasensory energies. I only believe in what I can touch, see, and hear. I am just reporting that somebody feels an arcane energy in the Mithraeum of San Clemente Basilica.’
“Giuseppe was still telling me the story of the god Mithra when we got to Umberto Sabatini’s house. Umberto’s build was different than Giuseppe’s. He was a tall redhead with a more refined way of dressing. Umberto had the air of a teacher, while Giuseppe looked like a blacksmith. Actually, he had been a teacher of Latin and ancient Greek, but he quit his job. Even though he had a degree in classic literature, he wanted to become a municipal policeman. Strangely, although Giuseppe and Umberto had master’s degrees, they didn’t want to have the job they had studied for. One wanted to be a writer instead of a physician, and the other a municipal policeman instead of a teacher. Two uncommon persons! Like them, maybe many of us would want to be uncommon, to lead a different life, change jobs, move away from our country, city, family, and so on. But we don’t do that because we tend to live according to the social patterns that have conditioned us since childhood. Umberto, at a brisk pace, got into my car and sat in the back seat. We introduced ourselves briefly and set off toward Capodarso, which is almost a half hour away from Isola.
“On the road Giuseppe resumed his tirade. ‘The Christians changed the figure of Jesus. The Greek word Christos, which means anointed, doesn’t apply to Jesus. The term was coined later by the early Greek-speaking Christians. Jesus was anticlerical, but the Christians turned him into a priest. Jesus didn’t hand over any rite, but the Christians borrowed their rituals from Mithraism, such as baptism, Holy Communion with bread and wine, and so on. The idea that Jesus was born from a virgin was also borrowed from Mithraism. In fact, Mithra was born from the virgin Anahita, who had been inseminated by the god Ariman through a miracle. Like Jesus, Mithra promised eternal life to his followers and was very popular among the Roman soldiers who could die in battle.’