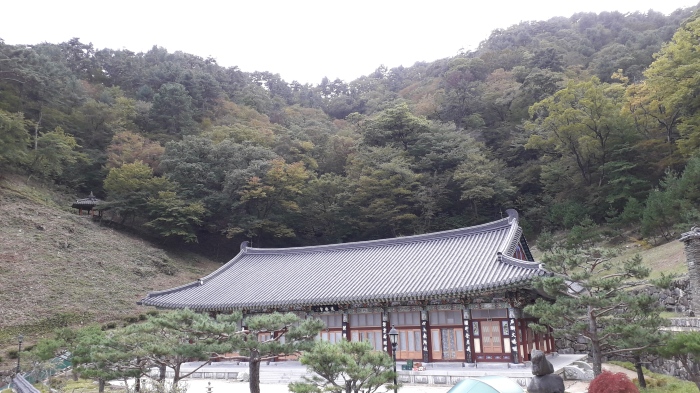 The Zen Center was in the woods. The drinking water flowed from the ground naturally. There were about ten buildings in the area. All of them were made of wood in traditional Korean style.
My roommate was the only one who spoke English fluently. As soon as I arrived, we met the Zen master. We bowed in front of him and then he started talking, while my roommate translated his words into English.
“I’ll give you something on what to meditate. This something is just a question: “WHAT IS THIS?” said the Zen master.
After the meeting was over, I asked my roommate the meaning of this words.
He answered, “The question “What is this?” implies something or somebody that asks the question. “This” can be considered the original engine of your actions.”
While I meditated by asking myself “What is this?”, I watched myself to find out whether I was made just of flesh, bones, and blood or there was some energy inside me. I couldn’t find the answer, but by meditating on such a question for twenty days, I purified my mind. The question “What is this?” chased away all the thoughts that had crammed my mind for a long time. My mindset changed, and I felt almost reborn.
Ettore Grillo, author of these books:
– A Hidden Sicilian History
– The Vibrations of Words
-Travels of the Mind

Here in the holy city of Rishikesh, I wanted to try my open-heart meditation again. As soon as we woke up, after having a cup of coffee and eating some bananas, we meditated for fifteen minutes. My wife did her breathing meditation, while I watched my breathing for a few minutes and then tried my open-heart technique. While I was watching my heart, imagining that it was open to everybody, I recalled a statue of Jesus that I’d kept in my room since I was a baby. The statue is around one meter tall. Jesus is portrayed as a master with a white robe and a red tunic, and his heart sticks out of his chest.
Not only is the heart fundamental for Christians, but Buddhists also believe that the mind is located in the heart. They think that the mind is a mental continuum without beginning or end. The Buddhist “mind” may be considered the equivalent of what Christians call the soul. Obviously, when I say that the house of the mind or soul is in the heart, I don’t refer to the physical heart, which can even be implanted from one person to another, but to the spiritual heart, whose house lies close to the physical heart.

I have tried to find Zen doctrine, but without avail. Finally, I have come to the conclusion that Zen doesn’t have it.
According to tradition, the first Zen Patriarch was Mahakasyapa to whom Buddha transmitted the wordless dharma, from mind to mind.
Osho explains the reason why there is no Zen doctrine: Words cannot convey the truth. The transmission of truth can happen just from mind to mind, from heart to heart. Since there are no words to explain dharma, Zen masters use paradoxes. In his Live Zen, Osho unravels the meaning of some Zen paradoxes.
What surprised me in this book was his interpretation of the series of paintings called The Ten Bulls of Zen. They are just metaphors. In the pictures, the cowherd is the searcher for enlightenment which is symbolized by the ox. They show the ten stages to enlightenment. Surprisingly, in the last stage the cowherd, after catching the ox, that is, after reaching the truth, goes to the marketplace. He returns to the ordinary life and remains in the world. Enlightenment doesn’t entail staying isolated, but living with others.
In the last chapter of Live Zen, Osho talks about a kind of meditation called no-mind. It consists of three parts. The first part is gibberish, a meaningless language, the second part is sitting silently, the third part is just relaxing.
I enjoyed this book, and I have a plan to experience Zen meditation sooner or later.
Ettore Grillo, author of these books:
– A Hidden Sicilian History
– The Vibrations of Words
-Travels of the Mind

A desk for tourist information was on the ground floor of the Hounslow Library. I went there for information about Buddhist temples in the neighborhood. A middle-aged woman was sitting behind the desk, watching her computer. She was in her sixties with ash blond hair, and she seemed to be very precise and meticulous at her work. She wore glasses with a silver frame. As soon as I approached her, she looked up at me from the computer with her pale blue eyes.
“May I help you?”
“Yes, please. Do you know about a Buddhist temple to visit nearby?”
The lady looked carefully on the screen and then turned to me.
“The nearest Buddhist temple is in Chiswick. Here is the address. It’s about half an hour from Hounslow bus station.”
I thanked the lady and headed for the bus station. After about half an hour, I reached Chiswick. It was not so easy to find the Buddhist temple. People didn’t know about it, but after many attempts, I caught sight of the building, which was near a large square with trees.
I expected to find a big temple open to the public like those I had seen in Southall. Instead, this temple was in a private building. I knocked on the main door, and a short gentleman, who didn’t look like an Englishman at first glance, came and opened the gate. He was about a meter and sixty centimeters tall, maybe less, light-skinned with gray eyes. I thought he was too short to be an Englishman, but he spoke excellent English slowly, making it easy for me to understand. He wore a gray suit and a red tie. I was under the impression that he might be the owner of that mansion.
He sat me down in a small room by the corridor. From time to time, monks passed. Their habits were yellow, different from the crimson ones I had seen while watching the Dalai Lama on television.
“The color of the habit of your monks is different from that worn by the Dalai Lama. Why? Is not the Dalai Lama the head of all Buddhists?”
“Not at all. In Buddhism, there are no heads, but only many traditions, which originated from the founder Buddha Shakyamuni. Buddhism has developed horizontally, not vertically, as it happened in other religions like Catholicism.
“Usually, the laity talks about Buddhism as if it were one religion, but it is divided into many sects, each one with its own doctrine, practices, and scriptures. These sects are divided into numerous branches. Many of them blend with local religions, cultures, and traditions. However, how can I help you?”
His question perplexed me. I was hesitant about what to ask. Then, I decided to go straight to the core of my problem.
“I’d like to know whether everything ends, that is, we disappear into thin air, or something of us survives, after we die. I want to know whether the soul exists and whether it is immortal.”
He looked at me with his eyes full of surprise, but soon he recovered, and, speaking very slowly for me to understand, expressed his opinion about the subject.
“It’s possible to give different answers to such a question! There is an extreme conception called nihilism, according to which everything ends and nothing remains with our death. Nothing is immortal, eternal, and unchangeable. Everything passes, transforms itself, and ‘becomes.’ We are like blades of grass that will never grow again after having been pulled up. There is another idea. It believes that death is only the beginning of a new life. After death, human beings are resurrected or reborn. It is like taking off worn clothes and putting on new ones. Our Buddhist idea is a half way. For us, after death, there is neither nothingness nor resurrection. We think that there is a kind of immortal and indestructible energy inside every living being.”
“Can you make yourself clear? What do you call energy?”
“Energy is just our minds.”
“The brain, that is?”
“Not at all. The mind is different from the brain.”
“But how can the mind purify itself?”
“In order to get good results, it is important to practice meditation. Come with me. I will show you our meditation room.”
He walked me to a room with a hazel-colored carpet on the floor. There were many statues. Shakyamuni Buddha stood in the center. Other statues and portraits reproduced enlightened masters.
“Who is your God?”
“We have no God. In this sense, we are atheists. But we have our own spirituality.”
“Who is Buddha?”
“Buddha is an attribute of a general characteristic. It means ‘The Awakened One,’ that is, someone who awakened from the sleep of ignorance and sees things ‘as they really are.’ There were persons who became Buddha in the past, and others will become Buddha in the future. According to Buddhist teachings, one of the main causes of suffering is the excess of self-grasping and self-cherishing. The tendency to protect the ‘I’ leads to delusions and excessive attachment. What we call love toward others is love toward ourselves. Too much attachment is oppressive for families, friends, and partners. It has nothing to do with love.”
I treasured his words.
“May I come to meditate in this temple from time to time?”
“Yes, of course, you can come here anytime.”
I said goodbye to that man and left the temple.,,