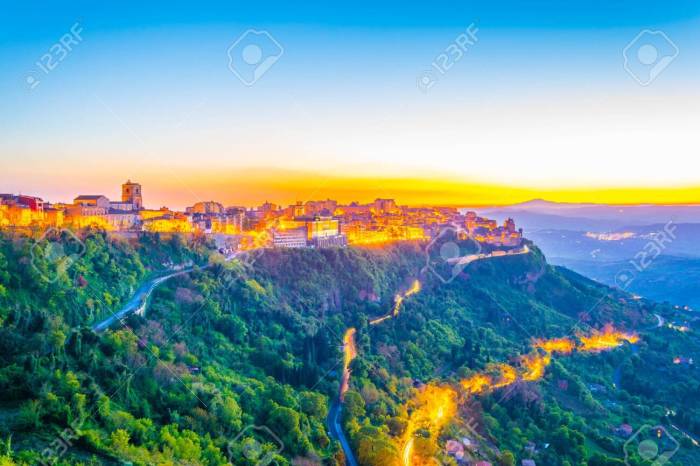 Enna is a small city on a plateau in the center of Sicily. Its founding dates back to time immemorial. It is called the navel of Sicily. It is part of the Erei mountain chain and is located at an altitude of about one thousand meters above sea level. Like all Greek cities, Enna was a city-state with its own government and its own mint. It coined a coin called ennaion.

With Greece Enna shared the same language and the same religion. The main worshiped goddesses were Demeter and her daughter Kore. Nobody knows exactly where the temples of Demeter and Kore stood, but it is certain that the main temple of Demeter in Sicily was that in Enna. Being Demeter the goddess of the crops, she was invoked to have a good harvest. It is said that during time of famine, even the Senate of Rome used to send a delegation to Enna to propitiate Demeter.

The people of Enna buried the dead by digging small rooms in the rock, usually facing south. In the room, painted terracotta vases were placed next to the corpse. Tombs have been excavated with well-preserved skeletons and red- and black-figure vases. Sometimes in the mouth of the skeleton was found a coin. The Greeks believed that to get to the Hades (the kingdom of the dead) souls had to pay a fee of one coin to Charon who ferried the dead across the Acheron, river that divided the world of the living from that of the dead.

Enna has always been a city devoted to religion. When Cicero, the great Roman orator, came to Enna to collect evidence against the governor of Sicily, Verres, who had snatched away gold and statues from the Sicilian temples, he was so surprised by the religiosity of the city of Enna that he had the feeling that its inhabitants were omnes sacerdotes (all priests).

When the Arabs conquered Sicily, they changed the Latin name Henna into Catrum (castle) Hennae (the genitive of Henna) which in the Arabic parlance became Castro Ianni, and then Castrogiovanni in the Italian language. This last appellation lasted until December 6, 1926 when Castrogiovanni was elevated to capital of province and was given back the ancient name of Enna. It essentially just dropped the H, which however is always silent in the Italian language.

– November 2 The Day of the Dead in Sicily
– A Hidden Sicilian History
– The Vibrations of Words
-Travels of the Mind
http://www.amazon.com/author/ettoregrillo