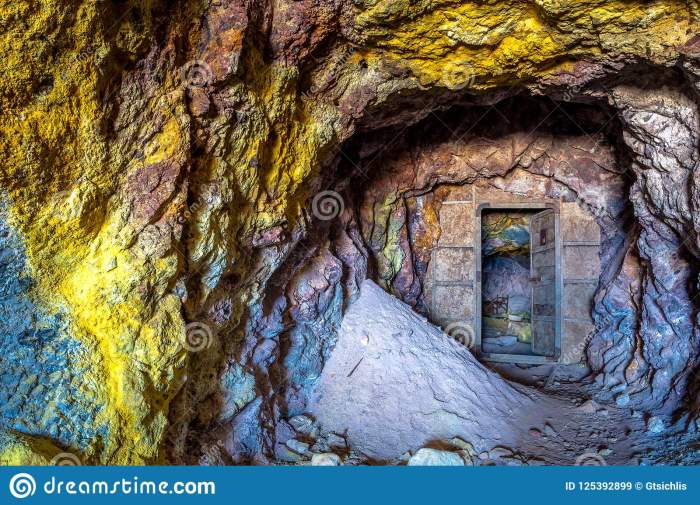 After an hour of riding, I saw a long line of men, young men, boys, and ragged children walking slowly on the road with their lanterns in their hands. They looked as if they were souls that were heading for the Valley of Jehoshaphat near Jerusalem on the day of the Last Judgement….

…We kept walking around the area until we finally arrived at an entrance that had been dug into the ground. The upper part of the tunnel and the walls were propped up by wooden piles and beams, and a narrow staircase led underground.

We went downstairs for about a hundred meters. Then the stairs became steeper and slippery. Little by little, as we went down it got hotter. We kept going until we arrived at a wide area from where many tunnels branched off. They were propped up precariously.
Along the stairs and the galleries I saw an uninterrupted line of children who were carrying that nauseating acetylene lamp in one hand and a heavy weight on their shoulder. The ore was stuffed into canvas bags or baskets. The children wore small bags stuffed with rags on their shoulders and heads to soften the harshness of the ore. Stooping under the weight and with labored breathing, they went upstairs slowly, giving out a painful moan with every step. I had the impression of seeing human-shaped moles which didn’t like to come out in the daylight.
“What is the average age of those children?” I asked.
“Their age ranges from seven to eighteen years. They cannot grow well because the air here is too rarefied and humid. Moreover, they carry weights that are too much for their young age. They cannot stop on the stairs to take a rest or the entire long train of carriers would stop. Their bodies are misshapen and they will never grow taller.”
We kept going down, and finally arrived at the end of one of the galleries. The air there was hot and unbearable. I saw that a few men were completely naked because of the stifling heat. With picks in their hands, they dug out the ore. Near them, a few children filled baskets and canvas bags with the ore, while other little laborers helped other children put the loads on their shoulders.