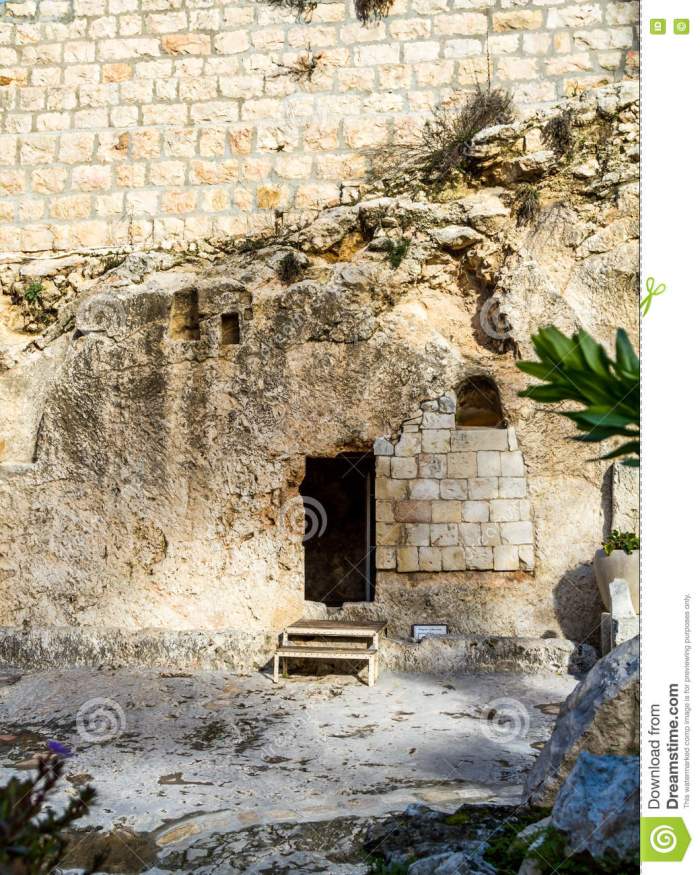 “When I got to the Garden Tomb, I was surprised at the silence in that place. I turned to the right and headed for the skull-shaped rock. It was a cliff with two big holes and a nose-shaped stone between them. To my eyes, it didn’t look like a skull. On the railing was a picture of the cliff. Looking at it, the whole cliff seemed to be skull-shaped.
“I turned left and walked to the tomb. Entering it, I saw three stone beds. One of them was a bit higher than the others. The ceiling of the tomb and the right wall had been plastered. I was alone inside the tomb. Turning my eyes to the wall on the right, I thought I saw Jesus’s face slightly imprinted on the wall. It was similar to that on the Shroud of Turin. I didn’t see the whole face but only some features like the eyes. At that time I felt that the real Holy Sepulcher was there.
“I got out of the tomb and looked for the winemaking press. I couldn’t spot it. So I asked a lady who was sitting on the bench. She got up and pointed out a pool where in the past the grapes were pressed by feet and the juice flowed into a smaller basin. ‘Do you want to see the real place where the Lord was crucified?’ ‘Yes, of course!’
“She led me to a rocky wall on one of the sides of the garden. ‘This cement covers the  crack in the rock caused by the earthquake that happened when Jesus passed away. Underneath our feet there is no rock but a wooden floor. The rock is hollow. Digging is in progress. Jesus’s blood fell from his bleeding body into the Ark of the Covenant. He established a new covenant between God and humans.’
“I was puzzled by her words. How is it possible that the Ark of the Covenant was below the cross when Jesus died? I thought. She noticed my doubtfulness, so she took out a pen and a postcard from her purse and wrote something. Then she gave me the postcard. ‘Do your research, and then you’ll find out that I am right.’
“Later, I checked her information. Actually an archeologist had been digging under the rock of Gordon’s Calvary. The aim was to bring into the light what was once called Zedekiah’s Cave, a vast underground quarry which supplied the stone for the Temple of Solomon. Therefore, nothing can be excluded. I still keep the postcard the lady gave me. Besides the name of the archeologist, she wrote, ‘Jesus loves you.’