Touring Turkey, we came across the Culture Center of Karabas-i Veli. It happened naturally, as if a powerful stream of energy had attracted us. The Center looked like the zawiya (Sufi lodge) I had attended in Rabat (Morocco) a few years ago, but unlike there, here the Sufis were the Whirling Dervishes who claimed to be direct descendants of the mystic poet Mevlana Jalaluddin Rumi.
While I was waiting for the performance to start, I sat on the floor for men. We waited for three hours. In the building there were two separate areas: the ground floor for men and the loft for women.

After two hours, a man wearing a cylinder-shaped red hat and a white beard, who seemed to be a top level Sufi, addressed the audience for more than one hour. He spoke in Turkish. I couldn’t understand anything, but the vibrations of his words seemed to penetrate the innermost layers of my soul. I felt that he was talking about God and the many ways to approach the Deity.
“The Sufi way is mystic,” said a man sitting beside me, when the speech was over.
I turned to him, with eyes full of wonder and kept listening to him.
“Do you know that Saint Francis of Assisi was a Sufi?” he asked.
“How can you know that?” 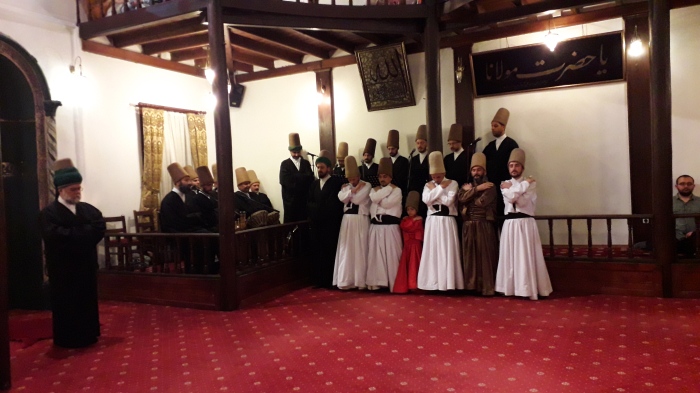 “I am sure about Saint Francis of Assisi as a Sufi and I can give you a lot of evidence on that. However, if you want to know more on this topic, read The Sufis by Idries Shah.”
Then, almost ten Dervishes entered the hall, which fell silent. They wore black habits, placed themselves on a raised side of the hall, played their musical instruments, and sang. After they played music for some time, the whirling dervishes came in one by one whirling. Their whirling was amazing! There are no words to describe this fantastic performance. Everything had a symbolic meaning, from the colors of the Sufis’ habits to the position of their arms and hands.
There are many modes of worshiping God, but only a few great spirits can follow the mystic way which is very demanding. The Sufis are among them, definitely.
Ettore Grillo, author of these books:
– A Hidden Sicilian History
– The Vibrations of Words
– Travels of the Mind
http://www.amazon.com/author/ettoregrillo