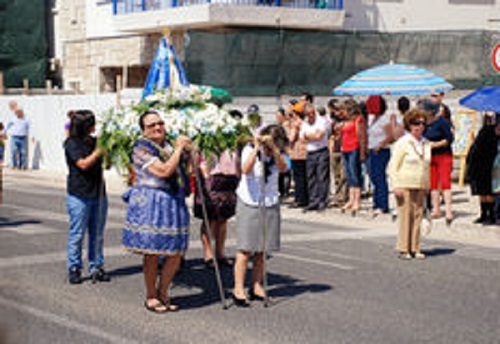 It was early in the morning, but the street already swarmed with people and food vendors. After ten minutes of walking, I arrived at the side entrance of the basilica. There was a large square before the main church. Actually, there were a few churches in the area besides the basilica that houses the original cloak on which the image of Our Lady is imprinted.
The place where the basilica now stands was a holy place long before the Spanish conquered Mexico. It is called the Hill of Tepeyac. At the site there was a temple devoted to the mother goddess called Tonantzin. Later, the Spanish destroyed the temple and built a nearby chapel. But the destruction of the temple couldn’t prevent the natives from pouring into the site.
Ten years after the Spanish conquered Mexico, a local peasant named Juan Diego, who had recently converted to Christianity, had a vision said to be Our Lady in the same area, who asked for a chapel to be built in the place. Diego reported what Our Lady had requested to the Franciscan bishop, but his account left the bishop doubtful. In fact, he required proof to corroborate what the native had reported. 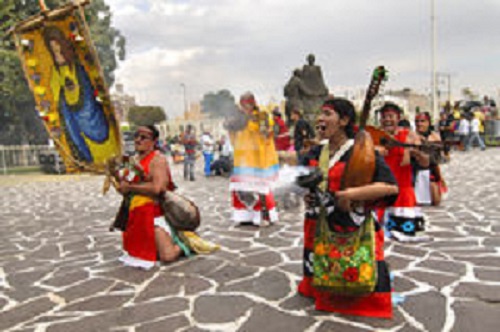 Juan Diego went back to the hill where the vision had happened, and asked Our Lady to give him proof that she was really the Virgin Mary. This time, Our Lady asked Juan Diego to pluck some flowers and take them to the bishop. This would prove the truthfulness of the vision.
He did as Our Lady required; he picked some roses and wrapped them with his cloak. Then he hastened away to the bishop. When he was in the presence of the bishop, he unfolded his cloak. The roses fell onto the floor, and the image of the Virgin Mary was shining on the cloak. From then on, Juan Diego’s cloak was guarded with care by the Franciscan friars, and a chapel was built in the place of the apparition. 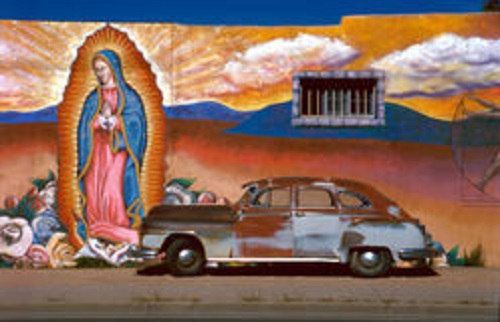 People from all over Mexico rallied to the chapel to worship the shrine, and it is reported that many miracles occurred. Nevertheless, the natives kept calling Our Lady by the name of Tonantzin, the ancient mother goddess revered by the native population. This gave rise to the doubts of the Franciscan friars, who were convinced that the veneration of the holy image was a pagan cult.
Something similar also happened in Enna. In fact, Our Lady, who is the patron saint of Enna, replaced the ancient cult of Demeter, who was the town’s mother goddess. The celebration in honor of Our Lady happens on July second every year, the same time when the old pagan cult of Demeter was celebrated. People of Enna today still invoke the name Kore, who was Demeter’s daughter.
In my opinion, it doesn’t matter the name you give to God; what matters is the spiritual feeling that radiates from the worshipper. So you can call God Allah, Brahma, Vishnu, or Shiva without losing the purity of your heart. Jesus and the Virgin Mary are beyond time, as they existed before time, long before coming into human history. They also existed in the pagan era and were worshipped differently.
The Virgin Mary appeared to Juan Diego in the form of a crossbreed maiden, and in the same place where the Spanish had destroyed the temple dedicated to the goddess Tonantzin. That means that nobody is allowed to destroy others’ temples, even if they are considered pagan. In fact, religion and spirituality are not related to a particular cult. Over the years people have given various names to God and worshiped Him in different ways, but it doesn’t entitle anybody to resort to violence to make one religion prevail over another.
As for the holy image imprinted on Juan Diego’s cloak, it was kept for some time by the Franciscan friars until it passed under the custody of the diocesan priests. With the passing of time, possibly in good faith, the original image was retouched in some spots. For instance, the crescent on which the Virgin Mary stands was painted with silver. Apparently, nowadays the retouches have discolored naturally, while the original image is still unaltered.

Pilgrims and visitors flocked into the square in front of the new basilica. I saw people, who from their olive complexion seemed to be natives or crossbreeds, carrying litters full of flowers. Some of them laid the litters on the floor and staged devotional songs and dances. I have to say that few times in my life have I seen such beautiful scenery. After having danced and sung, the pilgrims went into the basilica with their litters covered with flowers. I followed them and entered the basilica from one of the gates. It was a round church with an altar opposite the many rows of pews, and the holy image of the Virgin Mary was over it.
I sat on one of the pews and watched the shrine from a distance. Meanwhile, other groups continued to arrive in the basilica and headed for the back of the altar. I followed them and arrived at a moving walkway below the shrine. I admired the holy image for a few seconds while the walkaway moved.
Then I went out of the new basilica. I spent all day at the Villa de Guadalupe and visited the churches and buildings scattered in the area.
The old basilica housed Juan Diego’s cloak until 1974. A museum stands not far from the small old chapel erected on the same spot where the apparition happened. There were many exhibits in the museum. I lingered in a room full of many paintings that portrayed the Virgin of Guadalupe. The painters had tried to make a copy of the original image, but none of them had been able to reproduce it perfectly. Then I stood in front of a photograph, which was an exact copy of the original and had been approved by the ecclesiastic organs. While I was admiring the copy, I heard a voice behind me.
“Who knows what the number eight symbolizes?” said a man who was leading a group and who had the air of being a professor.
Nobody in his group answered his question. “The number eight symbolizes the infinite,” I answered.
“Exactly!” said the professor. “Now look at Mary’s pink robe. There are eight four-leaf clovers on it.”
Yes, I thought, the Virgin Mary is infinite, beyond space and time. She always has been and always will be. That means that she was on the Hill of Tepeyac long before the Spanish came to Mexico, even though she was worshipped under a different name.
This is an excerpt from A Hidden Sicilian History)
Ettore Grillo author of these books:
– A Hidden Sicilian History
– The Vibrations of Words
-Travels of the Mind
http://www.amazon.com/author/ettoregrillo