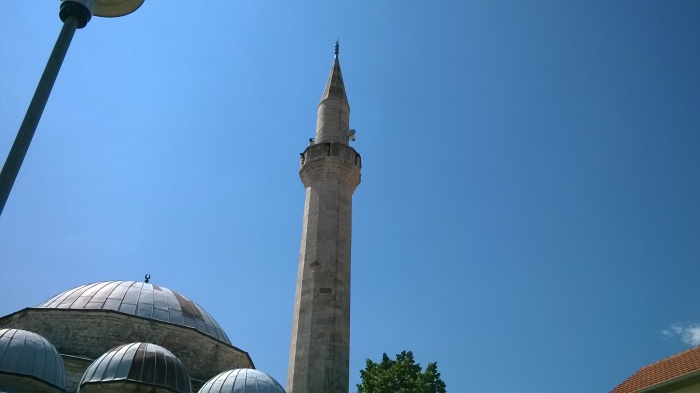 When I returned to my hometown, I went to my colleague’s house to give him the gift of the picture I had bought at Amman Airport. My colleague was fond of me. As soon as he saw me, he hugged me with his long arms so tightly that I felt like disappearing within his arms. He unwrapped my gift hurriedly, as if it contained a precious pearl. But as soon as he saw the painting with the words written in Arabic, his countenance changed.
“What do these words in Arabic mean?”
“I don’t know. I just bought this picture because it looked quite artistic to my eyes. It is not important to know the meaning of the words in an artistic work. Don’t you think so?”
His facial expression was ambiguous. He didn’t answer my question. Apparently, he didn’t seem to like my gift.
Hearing my voice, his wife, who was busy preparing a delicious dinner for me, came out of the kitchen. She smiled with happiness and thrust out her hand, still smelling of garlic, to shake hands. But on seeing my gift, her broad smile faded. I noticed, although they were smiling, an expression of disappointment in their faces.
When I met my colleague at school, he told me that his wife wanted to know the meaning of the Arabic words in the painting. I had the address and telephone number of the imam of the mosque. I called him to arrange an appointment. He said that we could meet him at the mosque before or after the Friday prayer.
My colleague and I arrived at the mosque almost one hour before the beginning of the Friday prayer. It was not easy to find the place, but in the end, everything was okay. The mosque was on the ground floor of an old building. My colleague took out the picture from his backpack. While waiting for the imam, we asked one of the persons in the mosque to translate the words in the painting into Italian.
“It is a sura,” said the man, whose features were markedly Arab.
“What is a sura?” asked my colleague.
“It is a chapter of the Koran.”
“How is it possible that a chapter is so short?”
“There are some suras that take many pages in the Koran and others with a few lines. The sura painted in the picture is the last of the Koran whose title is ‘Humans.’ Here is the translation: ‘In the name of compassionate and merciful God, say I seek refuge in the Lord of humans, the King of humans, the God of humans; from the evil of the whisperer, who slinks off, who whispers into the hearts of humans; from jinn and men!’”
In the meanwhile, the mosque was getting more and more crowded with people different in color. At two o’clock, the imam came in. He greeted us with great warmth and asked us to enter the prayer room. There were no chairs. We were standing, but from time to time we sat on the floor. At the beginning of the function, a man close to the imam announced the prayer with Arabic words that sounded like a melodious chant. Then, the imam began to talk. At the beginning, he spoke Arabic, but later, he continued to talk in Italian. It seemed to me that his speech was a comment on a sura from the Koran. After the function was over, we asked the imam to translate the words in the painting into Italian. He confirmed the translation done by the person we had met in the mosque before.
“Always remember the last sura of the Koran!” he told me in a warm and sincere voice. “Seek refuge in God whenever the devil comes into your heart and pushes you to be a bad man. When the devil blandishes you to go in the wrong direction, invoke Allah, and the devil will become smaller and smaller.”
We said goodbye to the imam. I promised him to come back again for the Friday prayer.
My colleague and I headed for our car parked nearby. When I was about to open the door, three men stopped us and asked for our identification cards. Then they showed us their policeman identifications. They were policemen wearing civilian clothes. They searched our car to find something. I didn’t know why. Then they called their operations room to report our names. They told us that it was a normal control, but they asked us too many questions. It made me suspect that our visit to the mosque was the cause of those controls. Never in my life had I been checked by the police. Despite my promise to the imam, I didn’t go to the mosque for the prayers anymore. I didn’t want other checks by the police and run the risk that my passport would not be renewed. I thought that I would return to that mosque when religious intolerance disappeared on Earth.

This is an excerpt from Travels of the Mind