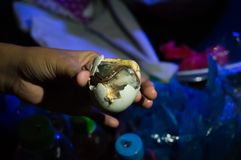 Traveling across the world, it has happened to me to eat every kind of food. I have eaten cockroaches, worms, grasshopper, frogs, raw meat, raw fish and so on, but at first glance what I was not able to eat was a balut.

What is a balut? It is a fertilized egg, that is an egg with a chick inside. It is considered a delicacy by the local people in Thailand, Vietnam and Philippines.

While I was travelling Indo-China I came across a balut twice.

The first time in Thailand. I was in Chang May, eating at a restaurant, when I saw a pile of white hard-boiled eggs in the shape of a pyramid that were kept warm by steam.

I was attracted by those eggs and ordered two of them. When I removed the eggshell, I saw some strange red veins. “This egg is not good!” I said to the waitress.

“No, it is very tasty! There is a chick inside” she replayed.

Despite her insistence, I was unable to eat that strange food and paid in vain.

A few years went by, and in Vietnam at a restaurant a waiter served me another balut. This time I wanted to try it, and little by little I ate both the chick and the egg.

Why I am writing about a balut? Because I want to draw attention to the fact that very often we humans cringe if a chick is eaten or a nest is destroyed, but we are left completely indifferent whenever thousands and thousands of migrants drown in the Mediterranean sea while trying to reach the European coasts. There are even people who love animals, but hate their neighbor. We had better observe reality as it is, regardless of our feelings of pleasure or displeasure, taste or disgust.